1. Place biscuits in a food processor and process until they are fine crumbs, add butter. Grease 18 x 1/2 cup patty cake tin, cut out 4cm x 15cm strips of baking paper to place in a cross in each hole. Divide the biscuit mixture between the holes and press flat. Refrigerate for 20 minutes until firm
2. Place boiling water in a small bowl and sprinkle over gelatin. Stir until the gelatin is dissolved, set aside and cool
3. Meanwhile place cream in a bowl and using an electric beater, beat until soft peaks form. Set aside
4. Place cream cheese, sugar and vanilla in a bowl and beat until combined and fluffy. Mix through gelatin until combined and fold through whipped cream. Fold through peaches and raspberries. Divide the cream cheese mixture between the patty cake holes and refrigerate for 4 hours or until set
5. Halve the extra peaches and remove the stone, finely slice. Remove the cheesecakes from the pan using the paper. Top with sliced peaches and raspberries to serve. 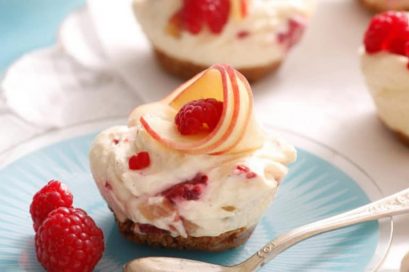