1. Preheat oven to 180°C fan forced. Lightly grease a baking dish.
2. Combine the flours and cinnamon in a food processor. Add the butter and process in short bursts until the mixture resembles coarse breadcrumbs.
3. Transfer to a bowl. Stir in the brown sugar and oats, use fingers to mix until crumble almost comes together.
4. Cut 1cm off the top of the apples. Remove the core. Use a teaspoon to scoop out apple to about halfway, leaving a 1cm border around the edge. Place the apples into the baking dish, press crumble mixture (about 1/3 cup per apple) into the well and evenly over the apples.
5. Bake for 30 minutes or until apples are just tender and the crumble is golden. Serve warm dusted with cinnamon sugar or cold as a lunch box/after school snack 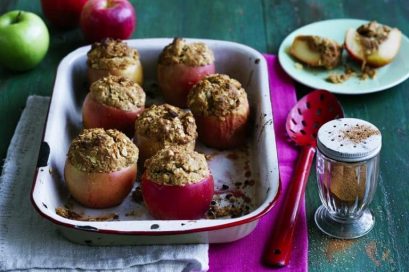